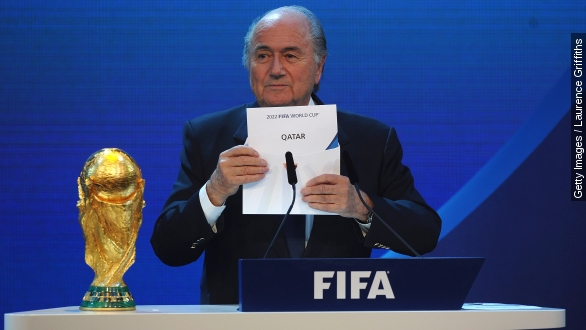 Yet another round of controversy involving Qatar and the 2022 World Cup.

Officials in Qatar reportedly arrested, detained and interrogated two TV journalists while they were filming a documentary in the country's capital city.

The two reporters were working on an expose allegedly revealing corruption in FIFA's decision to choose the Middle East nation for the world's biggest soccer event. (Video via PBS)

According to a translated press release from WDR and a tweet from one of the journalists, Qatar authorities also deleted the materials the crew had on hand at the time and confiscated and damaged their equipment.

The documentary is called "The Selling of Football: Sepp Blatter and the Power of FIFA." The WDR press release says the documentary still aired in Germany Monday.

Ever since Qatar's surprising World Cup winning bid in 2010, there've been a laundry list of critics questioning FIFA's decision to host the event there.

In-depth reports from The Guardian and ESPN have exposed the deplorable conditions construction workers endure, many of them migrants who risk their lives and are compensated very poorly — if at all.

There's even a Wikipedia page just for all the controversies surrounding Qatar's hosting duties.

Such as:
- the exorbitant price tag of more than $220 billion USD, 60 times what Africa spent to host in 2010.
- controversial comments from FIFA President Sepp Blatter regarding homosexuality, which is illegal in Qatar.
- and allegations of corruption in 2011, when Qatar was accused of secretly trying to buy the winning World Cup bid. (Video via NTDTV)

An internal probe by FIFA's ethics committee cleared the organization of corruption last fall, but it's still being investigated by the FBI.