Putin's 'Gunslinger Gait' May Be From His KGB Training 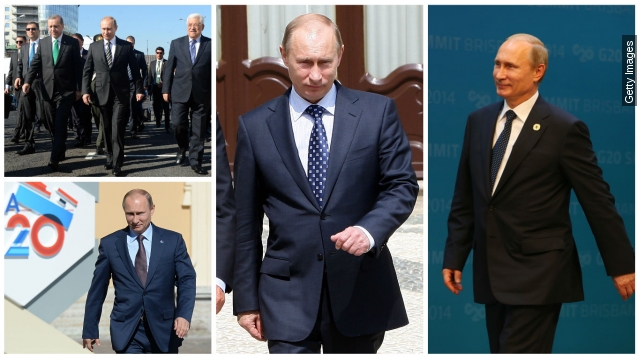 SMS
Putin's 'Gunslinger Gait' May Be From His KGB Training
By Steven Sparkman
By Steven Sparkman
December 14, 2015
Vladimir Putin is known to walk with his right arm held close while his left swings freely. A new study says it could be a sign of his KGB training.
SHOW TRANSCRIPT

Vladimir Putin barely swings his right arm when he walks. His walk has been called a "swagger," but a group of neurologists says it may be something else: KGB training. (Video via President of Russia)

The study comes from The BMJ's Christmas edition, which features funnier science like why Rudolph's nose is red.

The group ruled out Parkinson's, which can cause "asymmetrically reduced arm swing," because Putin's right hand shows no sign of tremor or muscle weakness. (Video via RT, President of Russia)

Plus, Dmitry Medvedev does it, too. So do other Russian officials. The study says KGB-style firearms training would explain the "gunslinger gait." (Video via RT)

Now, we're no experts, but do any other leaders have the walk of a trained killer?

Obama? Netanyahu? No. (Video via The White House)

Xi Jinping? No. (Video via CCTV)

This video includes images from Getty Images and jkrebs / CC0 and music from Birocratic / CC BY 4.0.