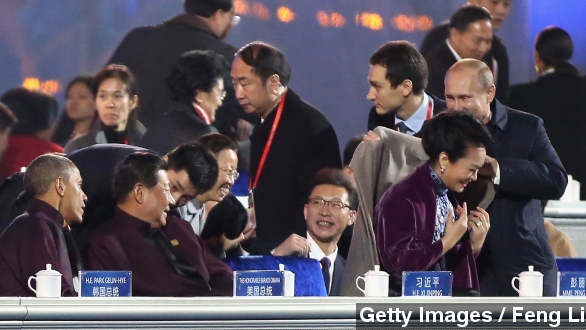 One of the many talents of Russian President Vladimir Putin, alongside tiger-sedation and shirtlessness is headline-grabbing, and that was fully on display in Beijing on Monday night.

Putin was seated next to Chinese President Xi Jinping's wife, Peng Liyuan, and — while Xi was distracted talking to President Obama — took the opportunity to drape a blanket around Liyuan's shoulders. (Video via CNN)

The blanket was quickly removed and given to an aide, but the incident was enough to earn censorship in the Chinese media and headlines abroad.

Almost more headlines than some other, arguably more newsworthy developments to come out of the Asia Pacific Economic Cooperation summit — like the back-and-forth over potential free trade deals. (Video via Financial Times)

Specifically, whether the regional group will adopt the U.S.-backed Trans-Pacific Partnership — TPP — or China's slightly clunkier-named Free Trade Area of the Asia-Pacific — FTAAP.

The TPP would have included 12 Asian countries, but excluded China. As of Tuesday, it looks like most countries have opted to support China's FTAAP, which is a narrower agreement, but includes the host country.

But according to Foreign Policy, the FTAAP is only one component of China's broader "New Silk Road Strategy." "The Silk Road strategy aims to facilitate large-scale infrastructure construction, energy sale and transport, and relocation of manufacturing industries," which would further benefit China.

It's not exactly surprising that something as salacious as a newly single world leader interacting with another world leader's wife would attract more attention than the nitty gritty of trade deals, but the blanket incident also rivaled another bit of Putin news for coverage.

Namely, for the first time since June, Putin met with President Obama in person, though a national security spokeswoman said the two only met for a few minutes at a time and didn't sit down for a formal meeting. (Video via ABC)

As The Washington Post's David Nakamura points out, given economic sanctions leveled at Russia over the conflict in Ukraine, Putin is less interested in Obama than his Chinese counterpart.

"[Putin's] presence in Beijing has accentuated his recent mutual courtship with Xi ... China has inked several major oil and gas deals with Russia, which in the face of western sanctions is increasingly eager to find new customers."

The 2014 APEC summit concludes on Tuesday.