Putin Gets The Cold Shoulder At G20 Summit 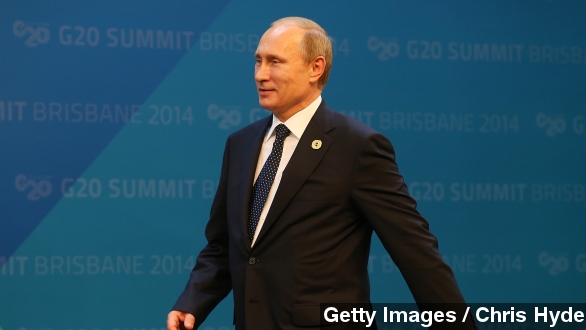 Twenty world leaders are in Brisbane, Australia for the G20 summit, but one of them is getting all the attention.

AL JAZEERA: “President Vladimir Putin was isolated, all but ignored by other world leaders over lunch.”

It was surely no accident that when Russia’s president arrived, Australia’s government sent only a junior minister to greet him.

Vladimir Putin probably didn’t help his cause by arriving to the meeting of the world’s largest economies with a fleet of warships in tow — prompting headlines like this from Australian papers, dubbing this an "Ice Cold War." (Video via Sky News)

The crisis in Ukraine,  while not officially on the agenda, is certainly going to be the subject of many private conversations.

Western leaders have warned Russia — which annexed Ukraine's Crimean peninsula in March — will face more sanctions if it continues supporting the separatists.

U.K. PRIME MINISTER DAVID CAMERON VIA BBC: "... we continue to see Russian troops and Russian tanks inside Ukraine, then there's going to have to be a very different relationship."

The host of the G20 summit was especially confrontational with Putin. This summer’s downing of Malaysian flight MH17 that left 28 Australians dead. Pro-Russian separatists are widely believed to have shot it down.

AUSTRALIAN PRIME MINISTER TONY ABBOTT VIA ABC (AUSTRALIA): “Look, I’m going to shirtfront Mr. Putin. You bet you are. You bet I am."

Russia’s central bank has said it expects the country’s economy to have zero growth next year. Putin warned sanctions would not only undermine Russia’s economy but the global economy.