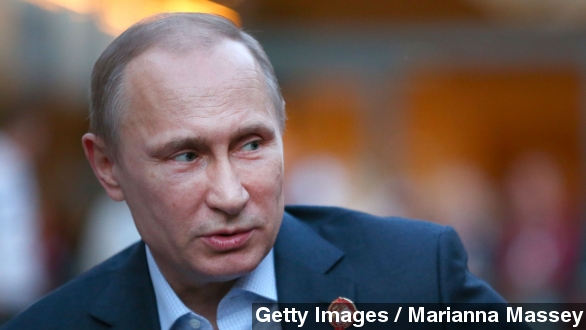 In an interview with Russian state television, Vladimir Putin looked pretty confident when he said he does not foresee an all-out war with Ukraine.

"I believe that such an apocalyptic scenario is unlikely, and I hope this will never happen," Putin said.

The Russian leader said if the Minsk agreement to resolve the conflict is fulfilled, the situation would "gradually stabilize."

But since signing that agreement on February 12, violence has continued in Eastern Ukraine, and a key part of the agreement has yet to be carried out.

Both sides have two weeks after signing to withdraw heavy weaponry from the front line, but Monday, Ukraine's military said rebel shelling is preventing that from happening.

And in a statement on Friday the president of the European Council said "there have been more than 300 violations of the ceasefire. People are still dying."

In the interview, Putin also continued to say Russia has not sent troops to help the rebels in Eastern Ukraine, despite strong evidence from NATO and Western allies suggesting otherwise.

Putin has denied Russian involvement before, most notably in the occupation of Crimea. But in that case, the Russian president eventually admitted that his forces played a role.

In this latest interview, Putin said he will not return territory he has annexed and said Ukraine should focus on its economy instead.

On Tuesday the foreign ministers of France, Germany, Ukraine and Russia met in Paris to continue to discuss the peace deal.