Putin Compares Tension With West To Chaining A Siberian Bear 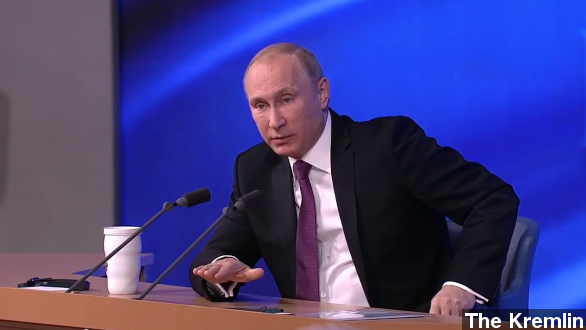 With his economy on the brink of a recession and its currency crippled, Russian President Vladimir Putin was set on doing one thing during his annual year-end news conference Thursday: damage control.

Speaking during RT footage of his press conference, he said, "The growth of the global economy will maintain, I'm speaking about the rates of growth are slowing down but the economy will grow, and our economy will overcome the current situation."

Acknowledging that Russia's current economic situation stems from both low oil prices and Western sanctions over the Ukraine crisis, Putin reassured those listening everything would inevitably be back on track in two years.

This, after the Russian ruble experienced its largest single-day drop in 16 years on Monday after falling 19 percent in the span of 24 hours. (Video via PBS)

When asked about tension with the West, Putin compared his country to a bear from the Siberian Taiga and accused the U.S. and its allies of trying to chain it through nuclear deterrence. (Video via Channel One Russia)

Speaking at his press conference, Putin said: "Maybe our bear should sit quietly. ... Maybe they should just leave him alone? They will not. They are trying to put it on a chain. And as soon as they do it, they will tear his teeth and claws out.”

Siberian bear metaphors and Texas comparisons aside, Putin's tone wasn't entirely against the West during his conference.

During his conference, Putin pushed for a diplomatic solution to the conflict in Ukraine, urging both sides to agree to a prisoner swap deal before Christmas.

He also said he's keeping open the possibility of creating a gas hub on the Turkey-Greece border in the event that the European Union needs further access to energy.

Still, it may be too little too late. President Obama just OK'd a bill allowing further sanctions against Moscow earlier this week, and European leaders are expected to approve their own round later on Thursday and Friday in Brussels.