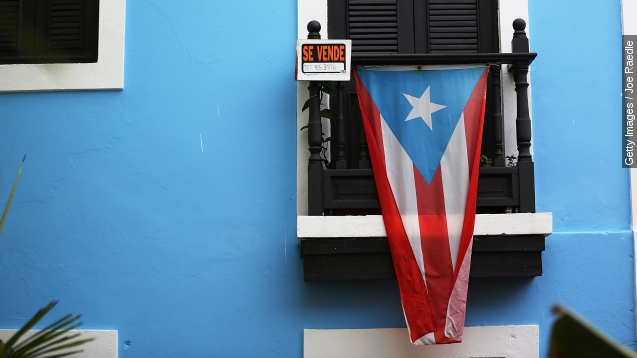 SMS
Puerto Rico's Muni-Bond Meltdown Likely Won't Burn Everyone
By Matt Patston
By Matt Patston
July 28, 2015
It's been a summer of bad news for financiers, but while Puerto Rico's municipal bonds are tanking, the rest of the muni-market looks promising.
SHOW TRANSCRIPT

It's been a summer of bad headlines and high blood pressure for those who follow of financial news. Seems like we could use something positive for a change.

Greece is collapsing, China's stock market is careening and now the U.S. has to worry about Puerto Rico drowning in municipal debt.

But Puerto Rico's debt problems actually lead us to something promising: After a hiccup in the spring, the rest of the municipal bond market is actually doing pretty well.

Cities and states offer municipal bonds when they need money for special projects — like new sewers or a new elementary school. Investors buy the bonds for the tax-free returns and relatively low risk.

The government then uses tax revenue or money generated from the new project to pay back investors. It's a pretty good system, provided the government has the money to make all the payments.

The muni-bond market was hurt at the tail-end of the recession, but it had a strong 2014.

As cities and states recover the tax revenues that were lost during the recession, munis become safer — with a few exceptions, like Chicago, which recently had its debt rating downgraded to junk status. (Video via Expedia)

This safety contributed to a strong 2014, when the muni-bond market posted gains every month.

And that rally made governments issue more bonds, which drives the price of the bonds lower and saturates the market — which led to a nationwide slow-down in the spring. Still, things are looking up in most of the U.S.

A handful of states — Kentucky, New Jersey, Illinois and a couple others — have some debt problems of their own. But isolated incidents tend to stay ... well ... isolated in the muni-market.

Bottom line: If you're tired of financial drama, maybe look away from Puerto Rico for a moment and see how well your local government is doing — at least with muni-bonds.