Puerto Rico Might Start Fining The Parents Of Obese Children 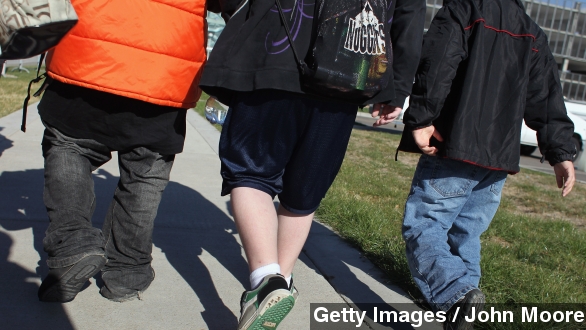 SMS
Puerto Rico Might Start Fining The Parents Of Obese Children
By Katherine Biek
By Katherine Biek
February 11, 2015
A bill introduced into the Puerto Rican Legislature on Monday would allow the government to fine parents of obese children $500.
SHOW TRANSCRIPT

A Puerto Rican senator introduced a bill Monday that calls for forcing the parents of obese children to pay a $500 fine. (Video via Fox News)

Local outlet El Nuevo Dia explained the bill, saying first the U.S. commonwealth's Department of Education would identify children it believes to be obese and talk to their parents about ways to improve the child's health.

It says if within six months there's been no improvement in the child's weight, the case will then be sent over to the Department of Family "under complaint of abuse." The next step could be a fine of $500 for parents or guardians, and that fine can increase to $800 if there's still no progress.

Now, the fine is one thing, but the complaint of abuse is what's really upsetting some.

Especially because several studies in the past decade have proven obesity can sometimes be tied to genetics.

Fox News Latino reports a Puerto Rican nutritionist said: "The fact that these childhood obesity cases are rooted in lifestyle does not give one the right to step into people's private spaces. This is not abuse, it's a disease. ... Obesity is the result of many factors and what we need to do is find solutions."

According to the Obesity Action Coalition, a child is defined as obese if he or she has a body mass index-for-age in the 95th percentile.