Puerto Rico Is Not 'America's Greece' 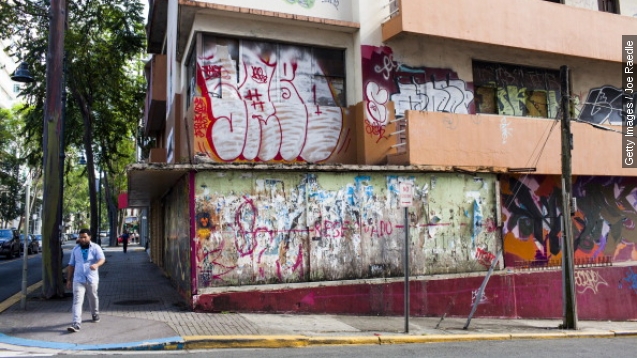 Since Puerto Rico's government announced it couldn't pay back its debt, it's earned a new moniker. (Video via Government of Puerto Rico)

An Al Jazeera anchor echoed that by saying, "Puerto Rico has been called 'America's Greece.'"

The answer to that is no. Not where it counts, anyway.

First off, the scale of the problem is much smaller. (Video via Nightly Business Report)

Greece is a much larger economy, and its default directly affects countries across the eurozone. (Video via Al Jazeera)

Bloomberg explains: "In Puerto Rico's case, hedge funds and distressed debt buyers have bought billions of the island's debt. And if a default hits, they will lose money. ... The United States government has much less of a reason to get financially involved in Puerto Rico."

And that brings up another big difference: Puerto Rico is a U.S. territory.

Greece is its own sovereign state, which means while it chooses to use the euro, it doesn't have to. (Video via Youtube / NatureClip: Free Stock Footage, European Central Bank)

The fear that it won't is behind the panic that has sent millions of Greeks scrambling to snap up euros while they still can. (Video via Arirang)

That's something they've been using more and more recently, another contrast with Greece's situation. (Video via CCTV)

But there is at least one significant similarity: In both Greece and Puerto Rico, creditors favor imposing austerity, cutting public services and raising taxes. (Video via YouTube / travelswithmywife, The New York Times)

And in both Greece and Puerto Rico, that's something most people want to avoid. (Video via Press TV)

This video includes images from Getty Images and David Marshall / CC BY NC 2.0.