Public Support For Guns Made Vote For Surgeon General Risky 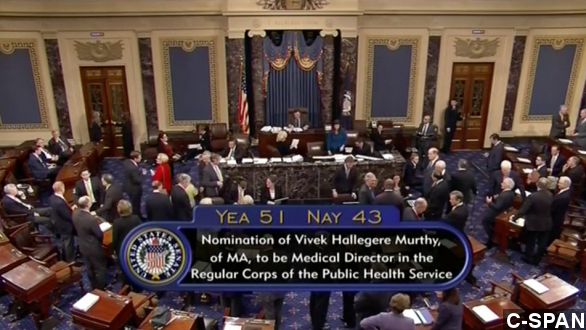 SMS
Public Support For Guns Made Vote For Surgeon General Risky
By Zach Toombs
By Zach Toombs
December 15, 2014
In the last two years, more Americans have begun supporting looser gun laws. And that's partly why Vivek Murthy had such a long wait for confirmation
SHOW TRANSCRIPT

And that trend is part of the reason the U.S. Senate took so long to confirm Vivek Murthy as surgeon general.

That vote margin was just enough to get Murthy confirmed to a position that has no policy making power and essentially serves as a health spokesperson. So, why did Murthy get held up for so long?

MARC THIESSEN, ON FOX NEWS: "Guns are not a disease. He seems to think they are."

Murthy has gone on the record before calling weak firearm laws a public health concern, even calling out the NRA specifically.

So, when the president picked him in late 2013 to serve as surgeon general, the NRA came out swinging, urging lawmakers to vote against Murthy.

Then how did Murthy and the Obama White House finally win their vote Monday? Because many Democrats had already lost theirs.

See, pro-gun activists have had a great past couple years. Since 2012, the percentage of Americans who say guns protect people has actually gone up.

And in this year's midterms, Republicans were eager to exploit any possible anti-gun sentiment from Democratic opponents.

"It was a squeaker, but in the end the Senate voted 52-to-47 to extend the ban on 19 assault weapons." (Video via Republican Party of Arkansas)

Arkansas Sen. Mark Pryor was one of several moderate Democrats who lost last month. During the election, those Democrats were reluctant to show support for Murthy, given the guns angle.

But with nothing to lose, those Democrats on their way out helped Murthy to the 51-vote mark Monday, just barely confirmed.