Protests In Turkey After Pro-Kurdish Lawyer Killed In Shootout 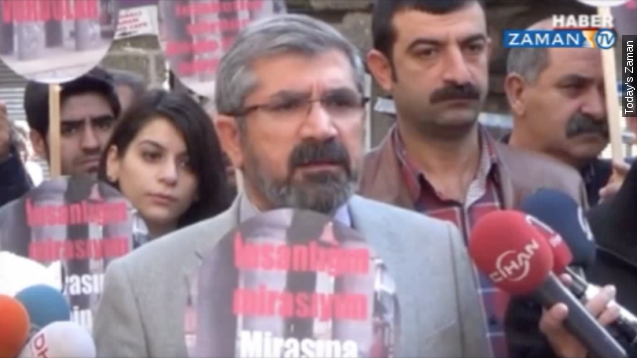 SMS
Protests In Turkey After Pro-Kurdish Lawyer Killed In Shootout
By Matt Picht
By Matt Picht
November 28, 2015
Tahir Elci was shot and killed while speaking out against the violence between Kurdish groups and the Turkish government.
SHOW TRANSCRIPT

Protests have erupted in Turkey after the shooting death of Tahir Elci, a prominent human rights lawyer and pro-Kurdish advocate.

Elci was shot while attending a rally and speaking out against the violence between the Turkish government and pro-Kurdish rebels like the Kurdistan Worker's Party or PKK. The attackers also killed one policeman and wounded several others.

The head of a regional bar association, Elci previously said he has faced death threats for making televised statements in support of the PKK, statements that left him facing criminal propaganda charges. It's still unclear whether Elci was deliberately targeted during the shooting.

President Recep Tayyip Erdogan blamed the shooting on the PKK, which Turkey and its allies consider a terrorist group. The government has promised a transparent investigation into Elci's death.

Turkey is currently conducting strikes against the PKK as part of its anti-terrorist military intervention in Iraq and Syria, something which has inflamed domestic Kurdish resentment of Erdogan's regime.