Protests In Moscow Create Another Problem For Putin 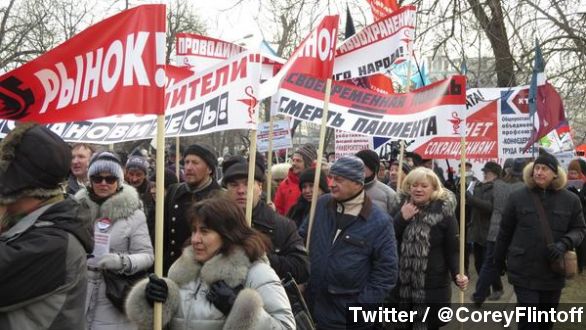 While the world's attention has been focused on Russia's foreign policy, a quiet opposition has been building in the country.

For the second time this month, thousands of doctors and patients rallied against planned cuts to Russia’s nationalized health care system. (Video via Ukraine Today)

According to the BBC, the cuts will close over 20 hospitals and could cause as many as 10,000 health care workers to lose their jobs.

Sunday's protest creates another problem for Moscow. It's already dealing with an economy on the brink of recession thanks to falling oil prices and tough Western economic sanctions.

But the planned cuts were in the works long before Russia’s current economic crisis. They're partially the result of President Vladimir Putin's 2012 campaign promise to raise wages for doctors. (Video via RT)

To fulfill this pledge and modernize the country’s Soviet-era health care system, authorities say the hospital cuts were needed.

Somewhere between 1,500 and 4,000 protesters disagree — arguing those improvements come at the expense government workers who will soon be out a job.  (Video via Russia 1)

But despite the large turnout in Moscow Sunday, it was the protests in Ferguson, Missouri that got top billing on the website of Russia's RT.

Pretty remarkable when you consider Russia's capital hasn't seen a social protest on this scale since 2005.

Despite the recent demonstrations, Putin currently enjoys his highest approval since taking office.

This video includes images from Getty Images and Georg Pik.