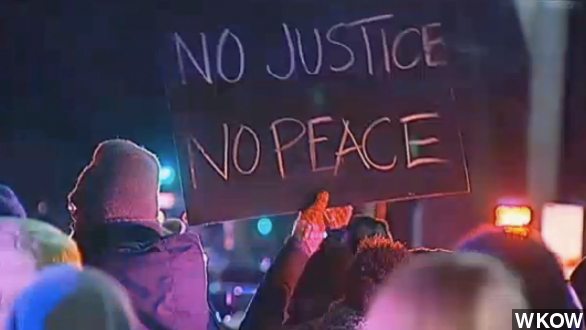 People flooded the streets Friday night and continued into Saturday to protest the killing.

Authorities have not released the name of the man who was killed, but media outlets have identified him as 19-year-old Anthony Robinson.

Madison police say they encountered Robinson after receiving calls that a man had committed battery and was jumping in and out of traffic. Robinson, who was allegedly behind the disturbance, eventually ran into an apartment. The responding officer reportedly then forced himself inside after hearing sounds of a disturbance and was struck in the head.

"In the context of mutual combat, in that sense, the officer then pulled his revolver and subsequently shot the subject," said Madison Police Chief Mike Koval.

Madison Police Chief Mike Koval told local media he was not certain the man was unarmed but the scene "did not reflect he had a gun or anything of that nature."

Robinson's mother told WKOW she doesn't understand what led to the shooting.

"My son has never been a violent person. Never. So to die in such a violent way it baffles me," said Andrea Irwin.

Wisconsin law requires officer-involved shootings such as this one to be investigated by an outside agency, so Wisconsin's Department of Justice will be looking into the incident.

The protests following the shooting follow demonstrations in Ferguson, Missouri and Staten Island, New York from last year. In both those cases unarmed black men were killed by police.

The Madison protests were organized by the Young, Gifted and Black coalition, a group that formed in the wake of Ferguson. Protesters on Saturday were marching from downtown Madison to the location where Robinson was killed.