Protests At The DNC Are Getting More Intense Every Day 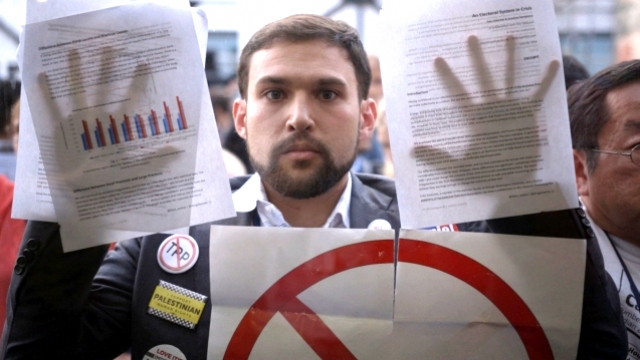 "So it's Night 2 at the Democratic National Convention. It was an intense day all over Philly today. Kate, you were at city hall, and you were talking to protesters there," Newsy's Eugene Daniels said.

"It was a super emotional day, specifically for Bernie Sanders supporters. Last night, he addressed the convention, so today, they were kind of reacting to him telling them it's time to support Hillary Clinton. We tried to get into what their mindset is that they're not going to support her moving forward. A lot of them are supporting Jill Stein, who was actually addressing the group that we were with today," Newsy's Kate Grumke said.

"Their catchphrase is 'Bernie or Bust,' and a lot of them said they literally want a bust. They want the party system to just break apart. They want to start fresh. And I found it interesting they wanted to take it to that extreme," Grumke said.

SEE MORE: When Protesters Say 'Bernie Or Bust,' They Mean It

"I talked to a guy out at the rally, and he said the Democratic National Committee, if there is a President Trump, has no one to blame but themselves. He said the 'Bernie or Bust' folks, they're not taking the blame for that," Daniels said.

"But you were actually in the big headline-making drama that happened today. So what was that like?" Grumke said.

"We were on the floor when Sen. Sanders called to suspend roll-call voting and just nominate Hillary Clinton, and there was a big party. They played 'Happy' by Pharrell; it was a big party. And all hell was breaking loose outside. They just started walking out," Daniels said.

"They were demanding an investigation. So they went from the convention hall and walked over to the media tent, and they sat down, and they put tape over their mouths," Daniels said.

"There was one young woman who was crying. She was really emotional, and she said they 'know there was election fraud in some states.' And there was no real proof of that she could provide," Daniels said.

"She said that, and we included it in our story, but I was kind of conflicted about that. It's not confirmed," Grumke said.

"At all — by anything. There's no actual evidence. I know some Bernie Sanders supporters are going to hate on us for what that can prove that at this point," Daniels said.