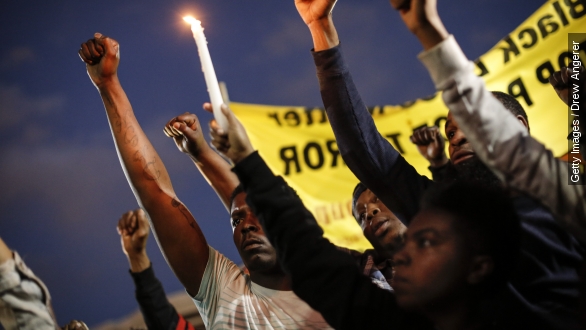 Hundreds of people marched on Baltimore's city hall Saturday to protest the death of 25-year-old Freddie Gray. WMAR, our partner station in Baltimore, was on the scene to capture the demonstrations.

"We will fight for Freddie Gray."

It's been almost two weeks since Freddie Gray suffered a severe spinal cord injury after being taken into police custody; Gray was eventually hospitalized and died a week later.

A lot of the tension in this case seems to stem from the questions about what happened to Gray from the time of his arrest to his hospitalization. As of now, it's not even clear why he was taken into custody.

According to WUSA, "The protesters who, who have been peaceful but loud, say they are asking for a more prompt protest, a bigger investigation then they've had."

Many demonstrations in Baltimore have been peaceful, but there have been reports of protesters throwing things at law enforcement officers and damaging cars.

Saturday's protest comes one day after Baltimore police commissioner Anthony Batts spoke at a press conference, informing the public there were errors made on the part of the officers who arrested Gray.

"We know he was not buckled in the transportation wagon as he should have been. ... We know our police employees failed to get him medical attention in a timely manner," Batts said.

WMAR reports, "What we do know is that police first spotted Gray along with another unidentified man on the 1600 block of W. North Ave. That's when police say he took off and the chase began."

It was about 45 minutes from the time he was arrested until Gray received medical care, something police now say should have happened before Gray was placed in the van.

Baltimore police have made security camera footage of the incident available to the public on its YouTube page, and are asking for witnesses to come forward.

The Department of Justice has opened an investigation into the death of Gray. All six officers involved in the arrest have been suspended.