Protesters In Brazil Call For Impeachment Of President 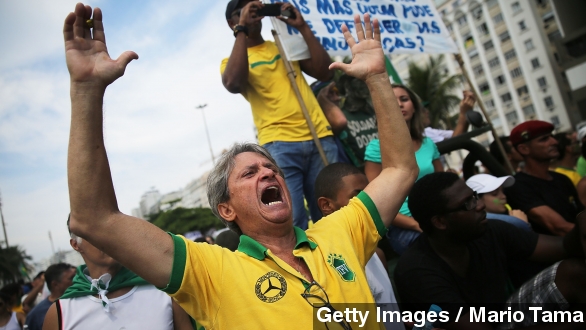 More than a million demonstrators filled the streets in several cities throughout Brazil Sunday to protest against President Dilma Rousseff.

Rousseff, who was just re-elected four months ago, has been caught in the middle of a corruption scandal involving the oil firm Petrobras.

Fifty-four people within Brazil's government are being investigated for possibly taking bribes from the company, most of whom are from the ruling Worker's Party.

Rousseff has been cleared of wrongdoing by Brazil's attorney general, but that didn't stop protestors from calling for her impeachment.

Some of her supporters have said those demands amount to a coup attempt.

There were a range of voices in the protests with some, according to The Guardian, holding signs asking for military intervention to "Liberate Brazil from corrupt politicians, parties and traitors of the nation."

Rousseff's government has been cutting spending and raising taxes in an effort to shrink the budget deficit and avoid a downgrade of the country's credit rating. (Video via CNN)