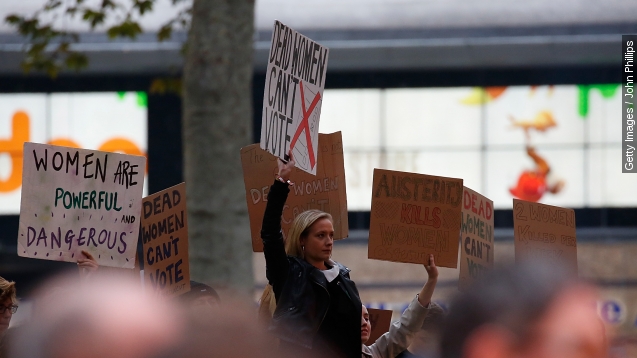 More than 100 protesters stormed the "Suffragette" movie premiere in London on Wednesday.

The movie, starring Meryl Streep, is a drama about securing women's right to vote in the U.K. The protest was organized by feminist group Sisters Uncut as a way to bring attention to domestic violence.

During the premiere, protesters chanted and held signs that said, "Dead women can't vote." Some protesters actually lay down in the middle of the red carpet.

The group's demands include guaranteed access to legal aid and housing for women who cannot afford to leave violent domestic situations.

The movie has sparked conversation and controversy before. (Video via Focus Features)

For a recent photo shoot, Time Out London invited stars of the movie to wear T-shirts that read, "I'd rather be a rebel than a slave."

Some criticized the white actresses for wearing shirts that seemingly compared their struggle to slavery.

In a statement released earlier this week, the magazine pointed out the phrase is from a historic speech by British suffragette Emmeline Pankhurst.

But the context of the slogan hasn't stopped criticism. A writer for Refinery29 wrote the comparison was "a major stretch ... even in England circa 1912."

The magazine said, "[The piece] has been read by at least half a million people in the U.K. and we have received no complaints."

"Suffragette" will be in theaters Oct. 23.