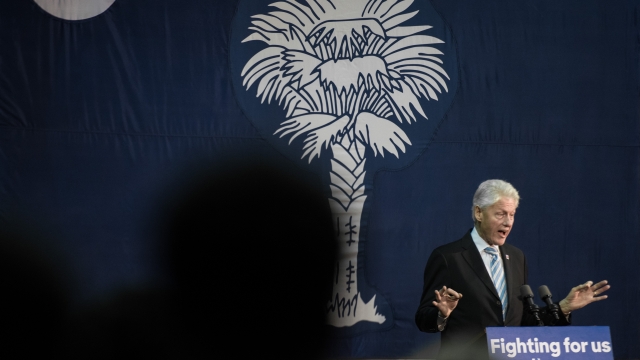 SMS
Protester Clashes With Bill Clinton Over Benghazi Attacks
By Matt Picht
By Matt Picht
February 27, 2016
The protester identified himself as a former Marine and accused Hillary Clinton of covering up the attacks.
SHOW TRANSCRIPT

Former President Bill Clinton got into a heated exchange with a protester over the 2012 attack on the U.S. consulate in Benghazi.

"We had four lives that were killed at Benghazi, and your wife tried to cover it up," the protester said.

The protester, who claimed to be a former Marine, confronted the former president at a campaign rally for Hillary Clinton in South Carolina and launched into a speech accusing Hillary Clinton of covering up the attacks.

Bill Clinton tried to cut the protester off multiple times, and the crowd booed and yelled over the protester's speech. The man was finally escorted out by security, and Clinton told the crowd "his mind has been poisoned by lies."

The Benghazi attack, which left four Americans dead, happened while Hillary Clinton was secretary of state, and she's been heavily criticized by conservatives for her handling of the incident.

Hillary Clinton confronted most of the substantive complaints during a marathon hearing last year. But passions around the issue have been inflamed by "13 Hours," a Michael Bay movie about the attacks.

The protester didn't give his name to reporters after being thrown out but told the Island Packet, "I wanted answers, and I wanted to make my point. ... The fact that (Hillary Clinton) is not in prison now is mind-blowing."