Prostitutes In France Will No Longer Face Fines, But Customers Will 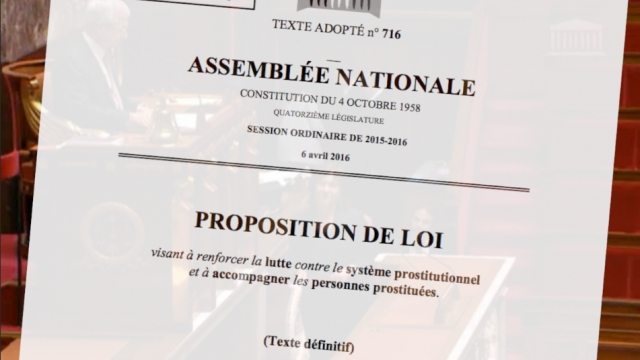 SMS
Prostitutes In France Will No Longer Face Fines, But Customers Will
By Melissa Prax
By Melissa Prax
April 7, 2016
The French National Assembly passed a law in France that aims to protect prostitutes by instead penalizing customers who pay for sex.
SHOW TRANSCRIPT

One of France's newest laws bans people from paying for sex.

The law, which took over two years to pass, is meant to protect prostitutes.

Instead of putting blame on sex workers, the law fines those who pay for prostitution. The fines start at $1,700 and go up to around $4,270 for customers caught multiple times.

It also offers money to support sex workers trying to get out of the industry. But France's Doctors of the World argued that money isn't enough to cover the estimated 30,000 sex workers in France.

France's sex workers' union protested the bill as it was being decided. The group argues the bill, which requires women to quit sex work in order to receive aid, does little to help industry workers and makes them more vulnerable.

The new law adds to existing bans on brothels and human trafficking. A previous French law that prevented sex solicitation by prostitutes is now overturned.

This video includes clips from French National Assembly, France 24, BFMTV, France 3 and BBC and an image from Getty Images.