Proper Nouns In Pop Music On The Rise 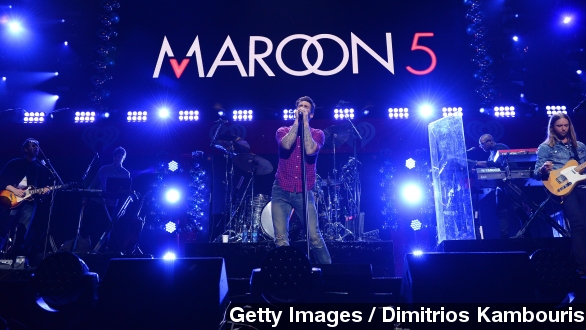 In Maroon 5's music video for the song "Sugar," the band is seen wedding-crashing around L.A. and performing their song in front of unsuspecting wedding parties.

Adam Levine mentions L.A., they stop in front of the historic Park Plaza Hotel, you see a flash of an old-school Lincoln and a billboard for "The Voice" — the song competition show in which Levine is a judge.

As subtle as those name drops and place references might have been, they are a very familiar part of music. And a recent study says those sorts of references are increasing.

The study published in the Journal of the Music & Entertainment Industry Educators Association looks at references to specific locations, names of people and product brands in the top 30 Billboard songs from 1960 through 2013. That's more than 1,500 songs over 53 years.

The author of the study, professor Storm Gloor, found a steady uptick in specific references over the years. Take, for instance, Kanye's new release "All Day." The rapper mentions everything from Southside Chicago and Minister Louis Farrakhan to Dennis Haysbert, the AllState Insurance guy, and — wait for it — Jackie Chan!

So, what's with the increased name checking? That's a tough question to answer, but Gloor believes it could be linked to artists marketing themselves as brands. He focuses on Jay Z who isn't just a businessman but a business, man.

Think about the number of times he mentioned classical artists in "Picasso Baby." Now you know what kind of paintings Jay Z likes and, according to Gloor, letting people in is one way to sell yourself.

There's also the product-artist partnership. In her video for "Telephone," Lady Gaga checks messages on her Virgin Mobile phone. That was a less-than-subtle product placement, and Gaga had her latest tour sponsored by Virgin Mobile.

It could be something even deeper. In his study, Gloor quotes Lucian James, the founder of a brand consultancy, who said in 2006, "Contemporary culture defines itself through the brands that we associate with."

Whatever the reason, listen closely to your music. You might be able to pick out more and more references as the years go on. (Video via Flipmode Records / Busta Rhymes)