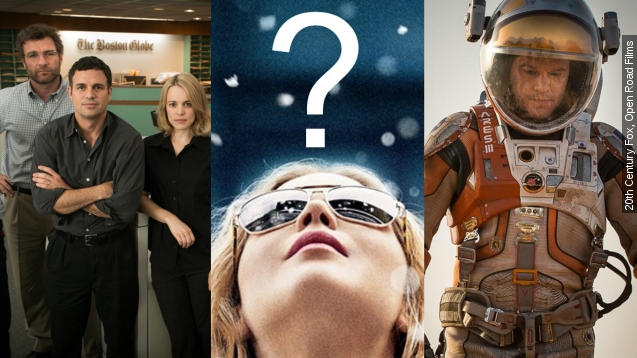 The Golden Globes nominations were announced Thursday morning and — in what's becoming the norm this awards season — only confused the race. And here's why.

First things first: The cast of "Spotlight" was totally snubbed. Until now, it was getting tons of attention at smaller award shows. And it got an ensemble cast nom at the SAG Awards nominations yesterday but no love at the Globes.

And that's probably because none of the actors in the film are being campaigned for lead role nominations. They're all trying for the supporting role nods. And that really crowds an already competitive field. Whether or not that campaign strategy will backfire for the Oscars remains to be seen. (Video via Open Road Films / "Spotlight")

Next, where do we put Alicia Vikander and Rooney Mara? Vikander is Eddie Redmayne's equal in "The Danish Girl," and "Carol" is told through the eyes of Mara's character.

And yet both studios are campaigning for the actresses in the supporting actress category, not in lead roles. Turns out the Globes weren't down to acknowledge them as only supporting roles, so those ladies were nominated in the best actress category instead.

But that does mean that Mara will have to compete against her co-star, Cate Blanchett — something that would be avoided if they were competing in two different categories. (Video via The Weinstein Company / "Carol")

Another interesting decision by the Hollywood Foreign Press Association was to accept "Joy" and "The Martian" as comedies. Granted, Matt Damon has some pretty funny moments in the latter film and JLaw is, well, JLaw. But we don't think anyone would consider them straight-up comedies like "Spy" or "Trainwreck."

That said, the comedy film category is not nearly as crowded as the drama one, so that's one way to get your film nominated.

"The Big Short" is also starting to make some waves in the awards circuit — you know, because there weren't enough strong contenders already. Aside from "Carol," which leads the nominees with five nods, "The Big Short" is close behind with four.

And like the actresses of "Carol," Steve Carell and Christian Bale will compete against one another in the best actor category. (Video via Paramount Pictures / "The Big Short")

No one knows what or who is going to win at the Oscars. It is anyone's race — so feel free to nominate yourself. At this point, we've all gotta shot.