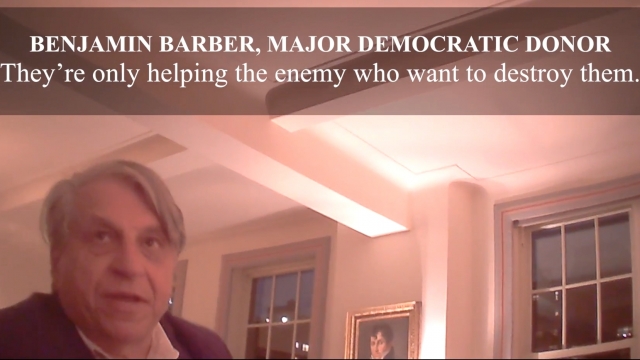 A Democratic donor was caught on camera allegedly criticizing African-Americans who vote Republican.

"So blacks who are helping the other side are seriously f**** in the head," Benjamin Barber said on a secretly recorded video.

That is Benjamin Barber. He compared African-Americans who vote Republican to Jews who helped Nazis during the Holocaust.

"They're only helping the enemy who want to destroy them. Maybe thinking that if I help them maybe it'll be different, maybe I'd get off OK," Barber said in the video.

The undercover video was recorded by Project Veritas, a group that says it exposes corruption in public and private institutions through its investigative journalism. It's worth noting Project Veritas has been accused of deceptive editing in the past.

A spokeswoman for the organization told Snopes the people throwing around those accusations are often the people caught on camera.

Barber's alleged comments were made during a fundraiser for Democratic U.S. Senate candidate Deborah Ross of North Carolina.

Barber is an author and political expert who served as an outside adviser to President Bill Clinton.

Barber also has an academic background. He's a distinguished senior fellow at Fordham University and a professor at Rutgers University.

After the video was published, some started calling for Democratic politicians to renounce Barber's comments. As of midday Wednesday, Barber had not commented on the video.