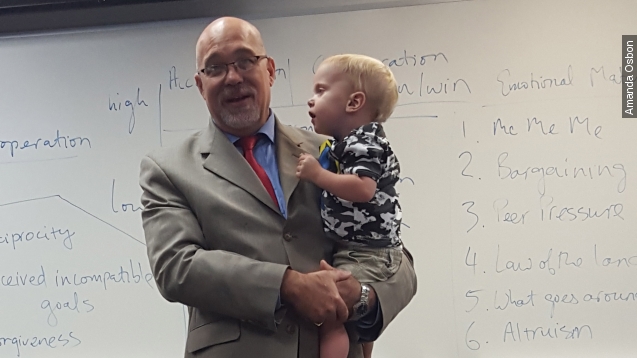 "I was embarrassed, you know, I had to swallow my pride, bring my kid to class," Amanda Osbon told WKRN.

Then, during class, a worst fear come true. Amanda Osbon's son Xzavier walked to the front of the class and put his arms up.

"Without missing a beat, my professor picked him up," Osbon said.

And that's how this viral photo came to be. Professor Joel Bunkowske just swooped Xzavier up and kept teaching.

The story of Osbon and her professor's compassion spread around the Web as quickly as a cat video.

She's working on a bachelor's in criminal justice and told NBC Bunkowske suggested she let her son walk around. When he picked Xzavier up, Osbon broke down in tears — the happy kind.

Osbon told Newsy when she knocked on her babysitter's door, no one answered, so she brought Xzavier to class.