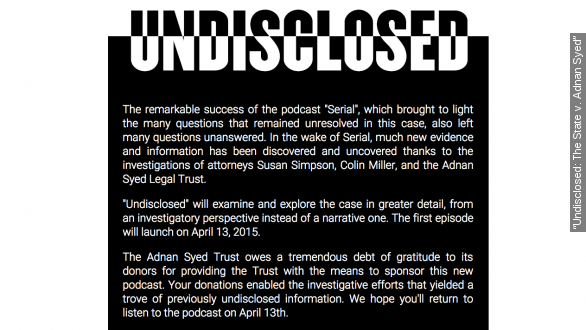 Last fall millions found themselves glued to their headphones, devouring the wildly popular true-crime podcast "Serial." Now, they'll get a chance to hear more of the story.

"From 'This American Life' and WBEZ Chicago, it's 'Serial' — one story told week-by-week. I'm Sarah Koenig."

The new podcast on the Adnan Syed murder case is called 'Undisclosed: The State v. Adnan Syed,' but if you listen, you likely won't hear Koenig's voice.

That's because the 'Undisclosed' podcast isn't affiliated with "This American Life." It's produced by a group of lawyers fighting to clear Syed's name. (Video via ABC News)

His supporters argue he should have been acquitted due to a lack of evidence and ineffective counsel. (Video via WMAR)

The producers include lawyer Rabia Chaudry, who you might remember from the original podcast. She's a friend of the Syed family and first brought the case to Koenig's attention. (Video via MSNBC)

She told PBS Newshour: "(Listeners are) still intrigued, they still want to know more. They want 'Serial' to do updates, and 'Serial' isn't. So we will."

Outside of the different creators, the new podcast will also follow a different format. According to its website, "'Undisclosed' will examine and explore the case in greater detail, from an investigatory perspective instead of a narrative one."

The podcast's success — or lack thereof — should give us a little insight into whether it was Syed's case or Koenig's storytelling that captured the nation.

Both podcasts examine the 1999 murder of Hae Min Lee, Syed's ex-girlfriend. Syed was convicted of the murder in 2000. (Video via CBS Evening News)

'Undisclosed' will air biweekly. It's set to debut April 13.