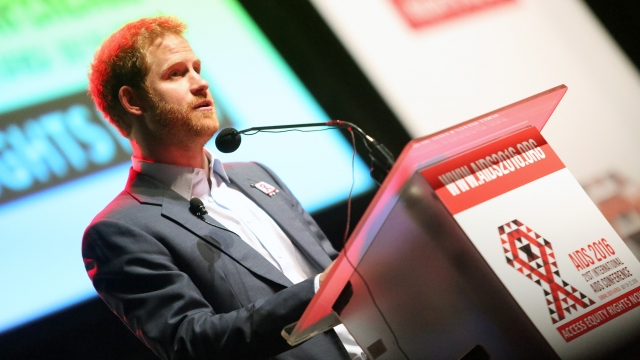 "When my mother held the hand of a man dying of AIDS in an east London hospital, no one would have imagined that just over a quarter of century later, treatment would exist that could see HIV positive people live full, healthy, loving lives," Prince Harry said at the International AIDS Conference.

Prince Harry is taking on the fight against AIDS and HIV, a cause his mother, the late Princess Diana, also championed.

The British royal spoke at the International AIDS Conference in South Africa on Thursday.

His speech comes just one week after he took an HIV test and live-streamed it on Facebook.

UNAIDS says the fights against new HIV infections is making good progress for children, but new adult HIV infection rates have remained steady for the past five years.

Prince Harry said the new risk in the fights against the disease is complacency. "As people with HIV live longer, AIDS is a topic that has drifted from the headlines. And with that drift of attention, we risk a real drift of funding and of action to beat the virus," he said.

In 2006, Prince Harry and Prince Seeiso of the African nation Lesotho founded Sentebale. Their organization helps children who suffer from extreme poverty and combats Lesotho's HIV/AIDS epidemic. On the organization's website, Prince Harry writes, "This charity is a way in which Prince Seeiso and I can remember our mothers, who both worked with vulnerable children and people affected by AIDS."

UNAIDS estimates more than 36 million people worldwide were living with HIV in 2015 and just 17 million of them were being treated for the disease.

The five-day International AIDS Conference featured presentations and speeches from experts and celebrities from around the world.