Prince George Skips His Bedtime To Meet The Obamas 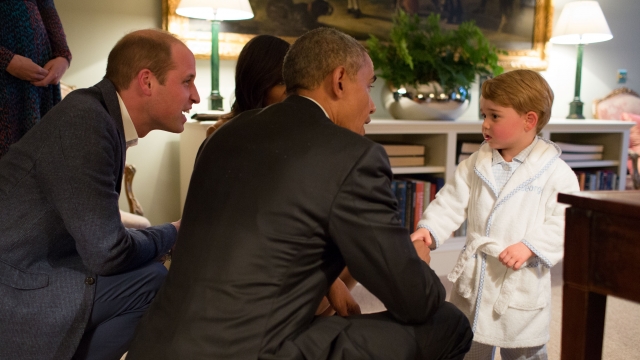 SMS
Prince George Skips His Bedtime To Meet The Obamas
By Ben Lawson
By Ben Lawson
April 23, 2016
Prince George, age 2, got one of his first lessons in being a diplomat when he met the Obamas who recently visited Britain.
SHOW TRANSCRIPT

It looks like Prince George is already learning the ropes of being a royal.

During Barack and Michelle Obama's visit to Kensington Palace, the youngest prince got to stay up past his bedtime to meet the president and first lady.

Photos show him in his bathrobe and pajama pants greeting the president and then riding a rocking horse that was a gift from the Obamas.

During their trip overseas, the president and first lady attended a lunch with Queen Elizabeth for her 90th birthday party where they gifted her a photo album of her meetings with American leaders throughout her reign.

The president also held a joint press conference with British Prime Minister David Cameron, where he urged the nation not to vote to leave the European Union.