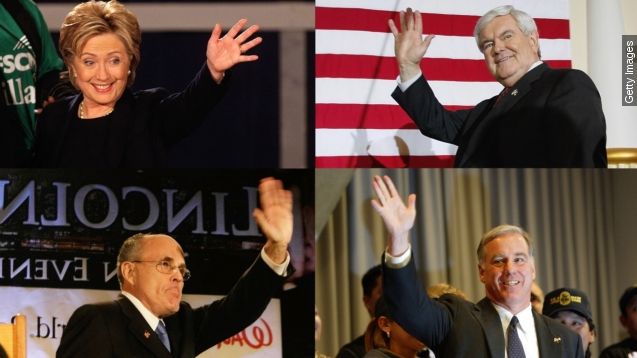 SMS
Primary Front-Runners On Jan. 1 Often Don't Stay On Top For Long
By Eugene Daniels
By Eugene Daniels
January 2, 2016
In the past three elections, these candidates led the pack on the first day of the new year and ended up losing.
SHOW TRANSCRIPT

But being out in front on Jan. 1st doesn't get you to the White House. Just ask these folks.

In 2004, Governor Howard Dean was the Dem's frontrunner. He led the pack by 15 points.

He dropped out a little more than a month later.

She conceded in June.

Rudy Giuliani topped the GOP on the first day of '08 by 3.5 points.

In 2012, former Speaker of the House Newt Gingrich was the frontrunner. He led by 2.2 points.

Gingrich left the race on May 2nd.