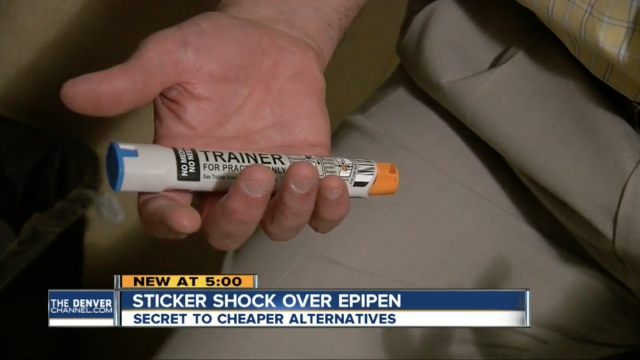 SMS
Congress Is Asking Why The Price Of A Life-Saving Drug Is Skyrocketing
By Ryan Biek
By Ryan Biek
August 23, 2016
The cost of a pair of EpiPens has risen by as much as 900 percent.
SHOW TRANSCRIPT

Congress is questioning the company that makes a life-saving drug over its skyrocketing price.

The EpiPen has a virtual monopoly in both business and effectiveness. Some argue there are no real alternative besides the EpiPen in the case of a serious allergic reaction. When these reactions do happen, a shot from an EpiPen can open airways, slow heart rates and reverse drops in blood pressure.

Since pharmaceutical company Mylan got the rights to the product in 2007, the price has increased by as much as 900 percent.

Doctors also recommend children who have severe allergies keep two pens at home and two at school, leading to a $1,200 tab.

An Iowa senator questioning Mylan notes parents aren't the only ones who have been facing higher bills. Because EpiPens are covered for many children by Medicaid, taxpayers have been hurt by the price increase, too.

Forbes estimates the actual drug inside an EpiPen costs Mylan about $1 per device.

The company does reportedly offer some coupons that, when combined with insurance, make it so families don't pay anything. However, the company told ABC an increasing number of families are choosing insurance plans with higher deductibles, so they might still be the ones having to pay.

Mylan says product improvements are the reason behind the price increase.

Correction: A previous version of this video cited a different figure for the price increase. The 900 percent increase cited here is based on one of the top prices for a pair of pens.