The Presidential Debates Might Have A Third Podium After All 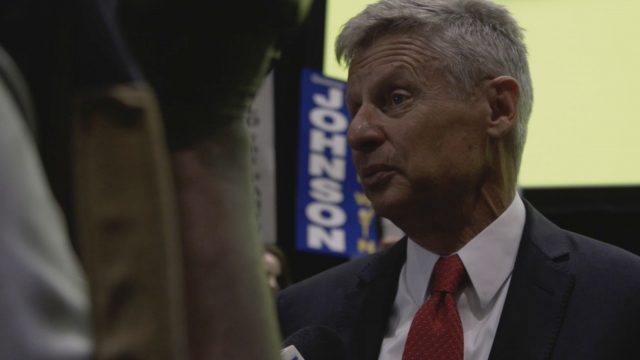 "No way that if you're running for president and you're not in the presidential debates — 100 million people watching the debates — there's no way that you could win," Libertarian Presidential Candidate Gary Johnson told Newsy.

Gary Johnson may just get his wish — or at least, the Libertarian presidential candidate is close enough in the polls the venues hosting this fall's debates have to prepare for him.

Politico reported Tuesday the Commission on Presidential Debates has told debate hosts to prepare for a third podium, if necessary.

SEE MORE: There's A Lot In The Way Of A Third Party Winning The White House

Candidates have to carry 15 percent of the vote in five national polls to participate in the presidential debates — a tall order for third-party candidates in any election year.

Only once since the Commission on Presidential Debates was formed has a third-party candidate actually participated in the debates — in 1992 when Ross Perot joined Bill Clinton and George H.W. Bush.

But Johnson is in the double digits in several recent national polls. Green Party candidate Jill Stein is polling fourth and needs to gain a lot more ground to be included.

"I think what's important is what it means for the American people," Stein told Newsy. "The American people actually get to hear other choices, which is exactly what they are clamoring for."

Last Friday, a judge threw out a lawsuit that was among the third-party candidates' last resorts to get a spot in the debates. The first debate is set for Sept. 26.