President Schwarzenegger? Only In Movies, Probably 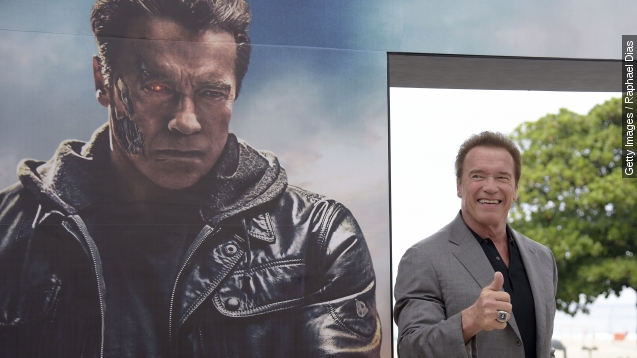 It’s no secret that Arnold Schwarzenegger ...

"He wants to be president …," says Sylvester Stallone’s character.

Seriously, he and his friends have been dropping hints for years.

"President Schwarzenegger," says a character in "The Simpsons Movie."

And in one case, they even included a sort of loophole to the "natural born citizen" clause.

"Yes. Even though he was not born in this country, his popularity at the time caused the 61st Amendment, which states that …" said Sandra Bullock’s character.

If Arnold ever is given the green light to run for office, it probably won’t be because of a 61st Amendment.

It’s more likely that the change will be because the Supreme Court is finally asked to take a good hard look at Article II, Section I of the Constitution. This is where the U.S. gets its guidance for who can be president and who can’t.

Those requirements are that a candidate must be at least 35 years old, that he or she lives within the country for at least 14 years and that they’re a "natural born citizen."

During the 2008 election cycle, both John McCain and Barack Obama were scrutinized under the clause. Obama was born in Honolulu, Hawaii, while McCain was actually born in the Panama Canal Zone. (Video via Iowa Public Television)

That zone was recognized as a territory of the U.S. at the time of his birth, which is also when McCain’s father served in the military. So the technicality was OK’d after a brief court challenge.

Arnold doesn’t really have a similar excuse. He was born in Austria in 1947 and didn’t immigrate to the U.S. until he was in his 20s. He is a citizen, though. And he’s been here for far more than 14 years — he was even elected to be the Governator of California. (Video via Ronald Reagan Presidential Foundation and Library)

But what if things did change — somehow?

"Would you run if they’d change that law?" asks Jay Leno.

"Oh, without any doubt — there’s no two ways about that," says Schwarzenegger.