In Zimbabwe, President And Protesters Are Both Playing The Blame Game 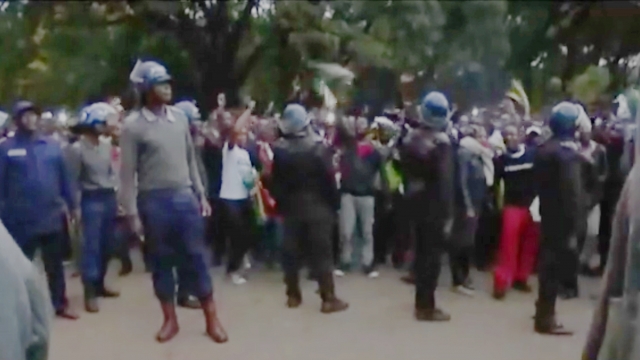 SMS
In Zimbabwe, President And Protesters Are Both Playing The Blame Game

Protesters want Zimbabwe's president to step down. He's not on board with their methods and says the demonstrations are too dangerous.

Robert Mugabe has been ruling Zimbabwe for a really long time — since 1980.

Under Mugabe's rule, the country's economy has tanked, most notably in 2008, and people are wary of it happening again now.

"We didn't have food, we didn't have anything. So, we can't let it happen. That is why we're here, not for power," a protester told CCTV Africa.

Mugabe has blamed Western sanctions for economic problems — like high unemployment and a weak currency.

While anti-Mugabe protests have been held on and off in the country over the years, they have been ramping up recently.

And recent demonstrations have gotten violent as police met crowds with tear gas and arrested some of the protesters.

Some of the country's judges gave permission for those demonstrations — or peaceful protests — but Mugabe is using their permission as ammunition to advocate for a protest ban to stay in place.

The United Nations is on board with the judges, though, urging the country's government to respect peaceful protests.

Mugabe seems to be wary of the massive protests and government overthrow attempts of Arab Spring in 2011 — saying Zimbabwe would not get to that point.

So what would it take for Mugabe to resign? According to him — death is pretty much the only thing.