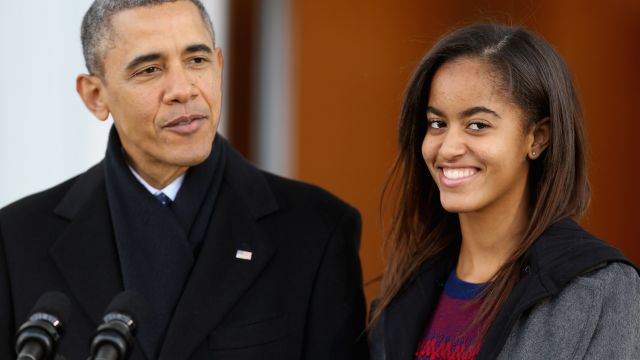 We've seen Malia Obama grow up before our eyes since her dad, Barack, entered the White House in 2009.

Friday, the Harvard-bound 17-year-old will cross the stage for her high school graduation as her proud parents watch in the audience.

The president declined an invitation to deliver the commencement address for his daughters' private school, Sidwell Friends, and blamed his emotions.

"Malia's school asked if I wanted to speak at commencement, and I said, 'No.' I'm going to be wearing dark glasses. ... And I'm going to cry," Obama said.

Former President Bill Clinton delivered the speech at Sidwell Friends in 1997 when his daughter Chelsea graduated.

Friday is also the 15th birthday of Malia's littler sister, Sasha, who will enter her sophomore year at Sidwell Friends this fall.

Malia will take a gap year before attending Harvard in 2017 where she will join the class of 2021.

This video includes clips from ABC News and images from Getty Images.