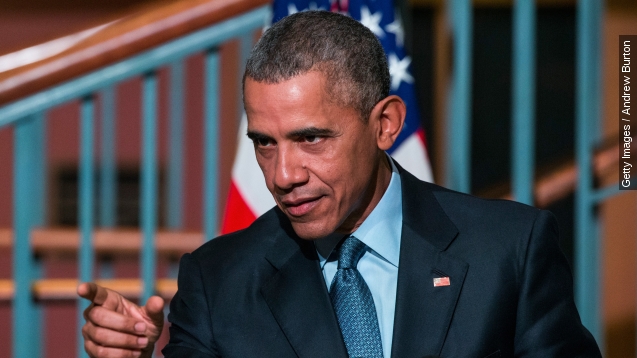 President Obama is taking aim at the Republican presidential candidates, especially about their debate gripes. The president told a New York fundraiser: "Have you noticed that every one of these candidates say, 'Obama's weak; Putin's kicking sand in his face'? And then, it turns out, they can't handle a bunch of CNBC moderators." (Video via CNN)

Some of the GOP candidates weren't happy with the last debate, which CNBC hosted, in particular with some of the questions. In response, the Republican leadership proceeded to suspend NBC's debate, scheduled for February. "We were betrayed, and I think the candidates were betrayed by CNBC," GOP Chairman Reince Priebus told Fox News. (Video via CNBC, Fox News)

The president also took shots at Republican climate policy. He used an analogy, saying, "You go to a hundred doctors, and 99 of them tell you, 'You've got diabetes.'" He continued, "You wouldn't say, 'Oh ... that's a conspiracy!'" (Video via MSNBC)