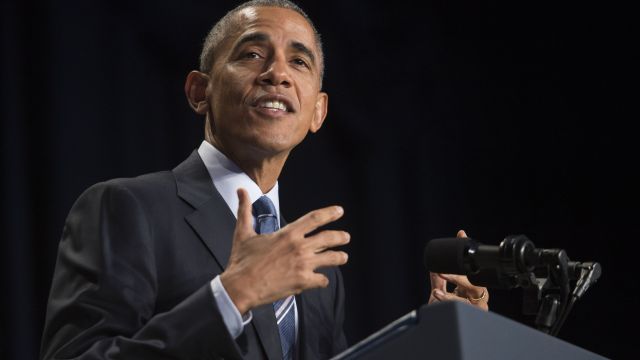 The White House just revealed a new climate-friendly transportation plan, and President Obama wants to pay for it by levying a controversial new tax on barrels of oil.

Politico reports the proposal will funnel about $300 billion over the next 10 years into "21st century clean transportation" — things like high-speed rail projects, more efficient public transit and cars with fewer emissions.

To offset the hefty price tag, Obama plans to make the oil companies pay a $10 fee on every barrel of oil — which is about a third of its current cost. The White House makes it clear this isn't just a fundraising measure. It also "creates a clear incentive for private sector innovation to reduce our reliance on oil."

Needless to say, this plan seems nearly impossible to push through right now: The passage of a bipartisan highway bill last year has made transportation a less urgent priority on Capitol Hill, and many lawmakers will likely have strong objections to a tax on oil in any case.

Instead, Obama's probably hoping this transportation plan will provide a framework for future lawmakers. Transportation accounts for 30 percent of the U.S.'s greenhouse gas emissions, so figuring out a way to cut back would help keep the U.S. in step with global climate change efforts.

But since oil companies would probably pass along the new fees to consumers, President Obama's plan is essentially calling for higher gas prices — something many politicians will be reluctant to get behind.

This video includes an image from Trevor MacInnis / CC BY SA 2.5.