Obama Is Going All Out On His Clinton Campaign Blitz 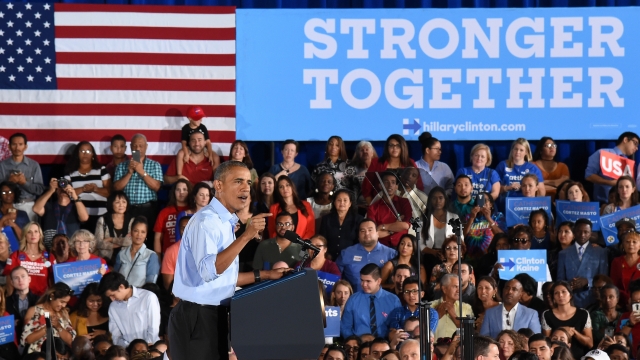 SMS
Obama Is Going All Out On His Clinton Campaign Blitz
By Grant Suneson
By Grant Suneson
October 27, 2016
President Obama is going to have a full schedule of campaigning for Hillary Clinton.
SHOW TRANSCRIPT

Remember all those jokes about Barack Obama going full relaxation mode while he's a lame-duck president?

"I feel more loose and relaxed than ever. Those Joe Biden shoulder massages, they're like magic," Obama said at the White House Correspondents dinner.

Well, this lame duck is going to be flying all over the country as part of a huge campaigning blitz for Hillary Clinton.

Obama is whipping up support for a Clinton campaign that just doesn't have the energy and enthusiasm of his two White House runs. He has a relatively high 55 percent approval rating, and Clinton needs all the approval she can get.

Obama's high approval rating stands in stark contrast to Clinton's. She's been so bogged down by scandals that it's made her the second-least popular presidential candidate on record — just behind her opponent.

White House press secretary Josh Earnest said the president has an "aggressive travel schedule" for the election's final 12 days, appearing at several Florida stump speeches as well as in lots of TV and radio appearances.

Obama has often highlighted how important it is to his own legacy that Clinton succeeds him. Donald Trump has promised to repeal a lot of legislation that Obama signed, including his signature bill, the Affordable Care Act.

He also said it's not just the victory that's important, but also the margin of the victory. He told donors in California, "We don't just want to eke it out — particularly when the other guy is already starting to gripe about how the game is rigged."