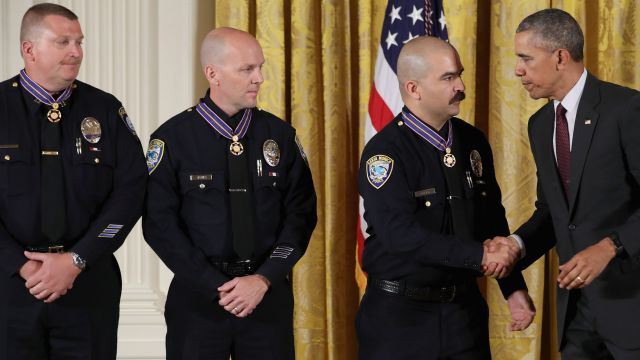 President Obama presented 13 people with the Public Safety Medal of Valor on Monday.

"It's been said that perfect valor is doing without witnesses what you would do if the whole world were watching," President Obama said.

The Medal of Valor is the nation's highest honor awarded to police, firefighters and other first responders who exhibit "exceptional courage, regardless of personal safety, in the attempt to save or protect human life."

The 13 who received medals Monday — including one posthumously — are among dozens of other public safety officials who have been honored for their acts of service since the award was created in 2001.

The officers honored Monday were all nominated by their bosses, recommended by a committee and cited by the attorney general before being recognized by the President of the United States.

"It's because of your courage, sometimes seen but sometimes unseen, that the rest of us can go about living our lives like it's any other day," Obama said.

But Obama didn't just applaud the courage of the medal recipients, he also thanked their family members.

"We know that you wait up late. You're worried, and you're counting down the minutes until your loved one walks through the door safe after a long shift. We know it never gets easier. We thank you for that," Obama said.