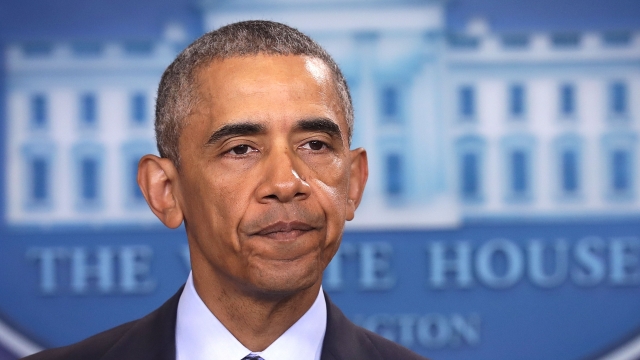 On more than a dozen occasions, President Obama has taken to the podium to address mass shootings in the U.S.

"This massacre is therefore a further reminder of how easy it is for someone to get their hands on a weapon that lets them shoot people in a school, or in a house of worship, or a movie theater, or in a nightclub. And we have to decide if that's the kind of country we want to be," he said after a gunman killed dozens in an Orlando, Florida, nightclub.

During his first few years in office, Obama's statements stressed prayer and unity.

"I would ask all Americans to keep the men and women of Fort Hood in your thoughts and prayers. We will make sure that we get answers to every single question about this horrible incident," he said after a shooting at Fort Hood, Texas.

"This is more than a tragedy for those involved. It is a tragedy for Arizona and a tragedy for our entire country. What Americans do in times of tragedy is to come together and support each other. So at this time, I ask all Americans to join me and Michelle in keeping all the victims and their families, including Gabby, in our thoughts and prayers," he said after a gunman opened fire at a Tucson, Arizona, grocery store.

"I hope all of you will keep the people of Aurora in your hearts and minds today. May the Lord bring them comfort and healing in hard days to come," he said after a deadly shooting at a movie theater in Aurora, Colorado.

But then he started repeating his calls for stricter gun laws.

"We're going to have to come together and take meaningful action to prevent more tragedies like this, regardless of the politics," he said after a gunman killed more than a dozen kids at Sandy Hook Elementary School in Newtown, Connecticut.

"We don't have all the facts, but we do know that, once again, innocent people were killed in part because someone who wanted to inflict harm had no trouble getting their hands on a gun. ... At some point, we as a country will have to reckon with the fact that this type of mass violence does not happen in other advanced countries," he said following the massacre at a Charleston, South Carolina, church.

"There's been another mass shooting in America — this time at a community college in Oregon. ... Each time this happens, I'm going to say that we can actually do something about it, but we're going to have to change our laws," he said after a mass shooting at Umpqua Community College in Roseburg, Oregon.

"As the investigation moves forward, it's going to be important for all of us — including our legislators — to see what we can do to make sure that when individuals decide that they want to do somebody harm, we're making it a little harder for them to do it," he said following the San Bernardino, California, shooting.

On Sunday, as he addressed the deadliest mass shooting in U.S. history, he said: "To actively do nothing is a decision as well."

This video includes images from Getty Images, clips from The White House and music from "Wonder Cycle " by Chris Zabriskie / CC BY 4.0