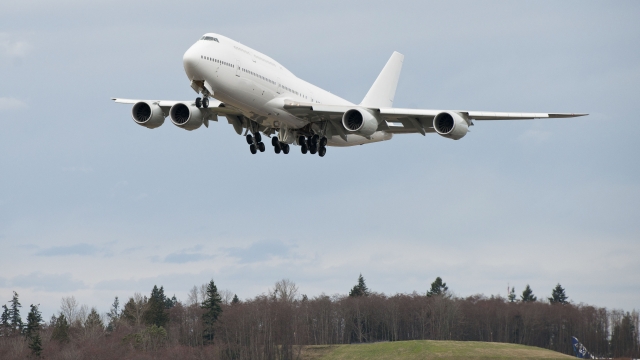 SMS
Prepare For Departure: Boeing Might Stop Making The 747
By Ben Lawson
By Ben Lawson
July 28, 2016
The 747 helped make air travel affordable, but it appears its best days are behind it.
SHOW TRANSCRIPT

After years of slumping sales, Boeing might be ending production of the 747.

The 747 is credited with making air travel more affordable in the 1970s due to the huge number of seats on the plane.

747s have transported space shuttles and have been used as Air Force One since the 1990s.

The company still plans to produce two more 747s to be used by the president. And those won't be done until 2023 due to the huge amount of upgrades being done to the planes.

But now, airlines are turning to more fuel efficient models instead of the monstrous, double-decker 747. In an earnings report, the company said it's ramping down production to six a year and is considering stopping all together.

Boeing announced a $234 million loss on its latest earnings report, and it recently took a $1.2 billion charge on its jet program.

These days, 747s are used mostly for cargo, but even demand for cargo freighters has slipped. That's because companies turned to shipping goods by sea or in the cargo holds of passenger planes during the recession.

But it's not an issue unique to Boeing. Airbus is cutting down production on one of its jumbo jets as well.

This video includes clips from Boeing and Airbus, and an image from Getty Images. Music provided courtesy of APM Music.