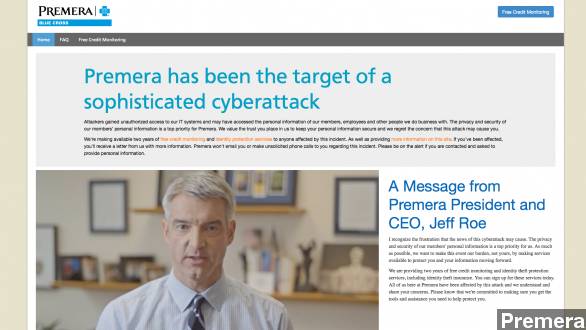 "You're likely seeing this video because you've heard our company has been the target of a sophisticated cyber attack," Premera President and CEO Jeff Roe said.

The records of some 11 million people from the Pacific Northwest may have been compromised after health insurer Premera announced Tuesday it's been hacked.

Premera was first compromised in May 2014, but didn’t spot any unauthorized access until January 2015.

The company says it waited until now to say anything because it needed time to patch security holes and prevent attackers from doing more damage. Eric Earling, a spokesman for Premera, told Seattle's KCPQ:

“They’ll engage in more malicious activity if you announce before securing your IT systems. So we felt it was important to protect consumer information by securing our IT systems first.”

Premera says so far there’s no evidence that any of its lost data has been used inappropriately.

The company is now working with security firm Mandiant and the FBI to investigate, just as health insurer Anthem did when it disclosed a similar breach in February.

And, just as in the Anthem attack, security researchers are pointing to China as a possible perpetrator.

They suggest in both cases, attackers used bogus emails and subtly misspelled websites to trick employees into granting them access to each insurer’s computer systems.