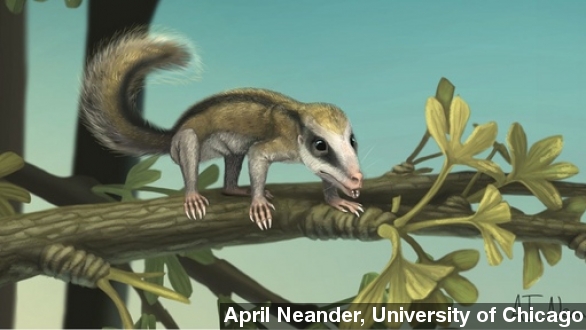 SMS
Prehistoric Mammals Looked Like Something From A Nightmare
By Jasmine Bailey
By Jasmine Bailey
February 13, 2015
Although they didn't look too cuddly, these prehistoric mammals seemed to be well-adapted, much like modern-day mammals.
SHOW TRANSCRIPT

Furry and fluffy and definitely not something you'd want to cuddle up next to — these are drawings of what some of the earliest prehistoric mammals probably looked like.

And according to new research, that's not all that makes these little guys special. Both of the ancient animals were apparently pretty good at escaping the wrath of their colossal carnivorous counterparts.

The fossils, discovered in 2011 and 2012 in China, are about the size of a shrew, making both mini mammals the perfect prey for dinosaurs.

But judging by its claws for climbing and teeth adapted for a tree-sap diet, Agilodocodon scansorius found hiding spots in the treetops. And Docofossor brachydactylus looks to have been well-adapted for hiding underground.

It's pretty cool when you take a closer look at the fossils — both are extremely well-adapted. Just look at their claws: One closely resembles a shovel while the other has long fingers, perfect for scaling trees.

Of the findings, the study's author said: "We consistently find with every new fossil that the earliest mammals were just as diverse in both feeding and locomotor adaptations as modern mammals. ... The groundwork for mammalian success today appears to have been laid long ago."

Both fossils, which are believed to date back about 160 million years, are on display at the Beijing Museum of Natural History.