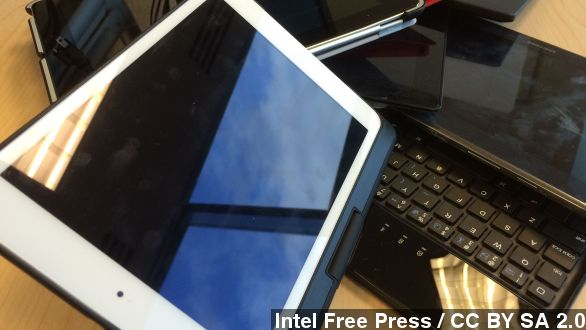 SMS
Predictions Of Tablets' Demise Sound Familiar
By Jake Godin
By Jake Godin
November 26, 2014
The tablet's days are numbered, at least according to a recent IDC report. The market-research firm paints a grim outlook for tablets.
SHOW TRANSCRIPT

At least once a year we hear something like this:

"Your prediction for 2013 is the sort of death of the PC?" asks Daniel Gross of The Daily Beast.

The headlines aren't too hard to find either.

This year there's a new victim: the tablet.

Or at least that's what one might infer from the latest report from market-research firm IDC, which pegs tablet growth at a dismal 7.2 percent in 2014. That's down from 52.5 percent in 2013. Ouch.

Once hailed as the "PC killer" by Bloomberg, the market for iPads, Android tablets and everything in between appears to have stalled.

According to IDC, the stall comes from a lengthening replacement cycle by tablet owners. Essentially, people aren't going out to buy them as much since they already have one.

Two more reasons for the slowdown: consumer hesitancy around Windows 8 and a lack of compelling new features in newer tablets, according to IDC.

But it's not all bad news for tablets, especially if you're looking at the IDC's 3.8 percent growth prediction for 2018.

Although a writer at Business Insider says the numbers seem reasonable, he notes, "Predictions four years into the future are notoriously difficult to get right and often look silly later on."

There's also the fact that IDC's numbers have come under fire multiple times in the past, either for being incorrect or for questionable data use.

And in July, Fortune quoted a former IDC researcher as describing the firm's workflow as a "sausage-making process" and that he used to tell customers any data not from major vendors was "garbage."

In any case, we still have four years to wait and see if former Blackberry CEO Thorsten Heins was right with his 2013 prediction that the tablet would be dead in five years. (Video via Bloomberg)