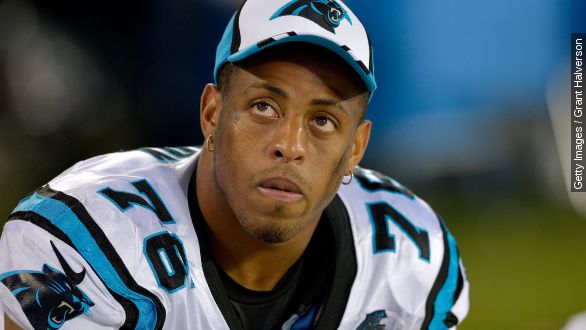 SMS
Praise, Confusion Over Greg Hardy's 10-Game Suspension
By Jay Strubberg
By Jay Strubberg
April 23, 2015
The NFL suspended Hardy for the first 10 games of the 2015 season without pay after an investigation into his domestic abuse case.
SHOW TRANSCRIPT

The NFL suspended Hardy for the first 10 games of the 2015 season without pay after a league investigation into his domestic abuse case involving his ex-girlfriend Nicole Holder.

In a statement, The NFL says Hardy "violated the Personal Conduct Policy by using physical force against Nicole Holder in at least four instances." The league recounted, in gruesome detail, each of those alleged encounters.

NFL Commissioner Roger Goodell, who's been criticized for his handling of other domestic abuse cases in the past, said that a "suspension of this length would be appropriate under any version of the Personal Conduct Policy or its predecessors." (Video via New York Daily News)

But, according to the Charlotte Observer, those charges were dropped in February after she refused to appear in court to testify.

USA Today's Christine Brennan praised the league's ruling and said the stiff punishment for Hardy was a step in the right direction.

According to Brennan, it serves as "one of the toughest penalties for domestic violence in U.S. sports history."

Other football analysts were shocked with the duration of the suspension, given the league's updated policy only calls for a six-game suspension for first-time domestic abuse offenders.

"The NFL and the way they approach these situations. I don't know what they do. Do they flip coins? I'm not really sure. Does last year's 15-week suspension count?" Bleacher Report NFL Analyst Chris Simms said.

As it stands, this means Hardy won't make his Cowboys debut until Thanksgiving Day against his former team, the Carolina Panthers. But that could still change, as he reportedly plans to appeal the ruling.

And history's in his favor. The NFL previously levied suspensions against Ray Rice and Adrian Peterson regarding their domestic abuse cases. Both those punishments were shortened on appeal.