Pot Dispensaries Have Too Much Money And Nowhere To Put It 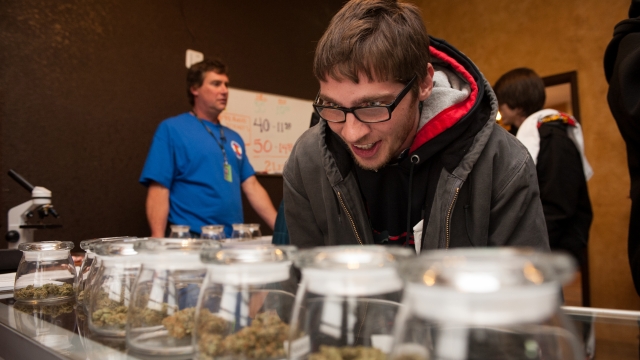 SMS
Pot Dispensaries Have Too Much Money And Nowhere To Put It
By Grant Suneson
By Grant Suneson
February 2, 2016
The marijuana business is booming, generating $5.4 billion last year. But because weed is federally illegal, banks won't accept their cash.
SHOW TRANSCRIPT

We’ve all dreamed of having so much money we don’t know what to do with it. But that’s becoming a real problem for legal marijuana businesses.

Americans are projected to sell $6.7 billion worth of legal pot in 2016 after doing $5.4 billion worth of business last year, making weed the fastest growing industry in the country, according to a study cited by Vice News.

The only problem with the booming bud business is that it’s illegal at the federal level. So if banks accept money from pot shops, they risk losing their FDIC insurance.

So, dispensary owners have been forced to keep their earnings in Breaking Bad-style stacks of cash, which has business owners and politicians concerned about not only their profits but their safety as well.

Oregon Sen. Jeff Merkley said: "Forcing businessmen and businesswomen who are operating legally under Oregon state law to shuttle around gym bags full of cash is an invitation to crime and malfeasance. That must end."

But with seven states looking to legalize recreational pot in 2016, the tide could be slowly turning in favor of weed shops.

An amendment that would allow marijuana shops to bank with federal institutions was added to a government spending bill last year, but ultimately failed to make the final cut.

For now, dispensaries in Washington and Oregon are turning to local credit unions that only operate in-state to handle their pot profits.