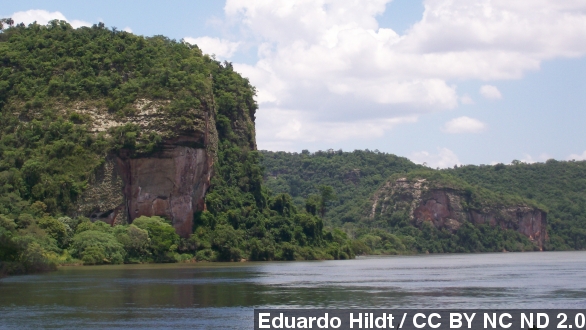 SMS
Possible Nazi Hideout Found In Argentine Jungle
By Danny Matteson
By Danny Matteson
March 23, 2015
Researchers from the University of Buenos Aires found Nazi-era coins and a fragment of a plate that reads "Made in Germany" amongst the ruins.
SHOW TRANSCRIPT

Deep in the remote jungle of northern Argentina are three long-forgotten stone structures, but who allegedly built them might surprise you.

No, researchers don't believe these structures were built by ancient tribes but by Nazis to be used as a safe haven should Germany lose World War II. (Video via Clarín, Discovery)

The researchers from the University of Buenos Aires base their hypothesis on several German coins, a shard of a porcelain plate and at least one swastika carved into the stone.

The coins were minted between 1938 and 1944, during the Nazi Third Reich. An inscription on the plate fragment reads "Made in Germany." (Video via Clarín)

As the leader of the research team tells Argentine newspaper Clarín, "Apparently, halfway through World War II, the Nazis had a secret project of building shelters for top leaders in the event of defeat — inaccessible sites, in the middle of deserts, in the mountains, on a cliff or in the middle of the jungle like this."

Among them, Adolf Eichmann, one of the main orchestrators of the Nazi Final Solution, was captured in Argentina in 1960. He was later taken to Israel, where he was tried and executed. (Video via British Pathé)

According to The Washington Post, one of the three buildings was likely used for housing, one for storage and one as a lookout.

The structures lie in Argentina's Teyú Cuaré park in northern Argentina near Paraguay.

This video includes an image from Eduardo Hildt / CC BY NC ND 2.0 and music by Chris Zabriskie / CC BY 4.0.