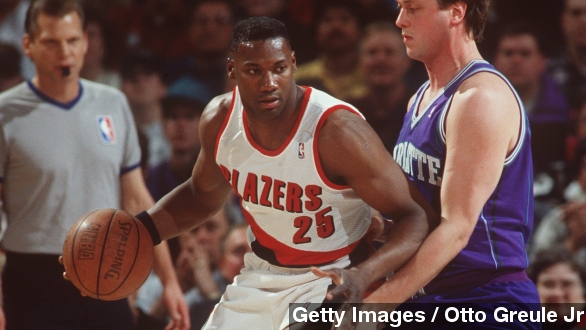 Jerome Kersey, a Portland Trail Blazers legend who was beloved in the city, died Wednesday. He was 52.

Dwight Jaynes of CSNNW.com says, "Kersey underwent a knee surgery earlier this week and Wednesday reportedly told fellow Trail Blazer employees ... that he wasn't feeling well and was going to go home. He apparently collapsed on the way to his car." The cause of death wasn't immediately known.

The man nicknamed "No Mercy" Kersey played for several teams in his 17-year career, but he was best known for his time in Portland.

He landed a starting role on the team after a breakout 1987-88 season, averaging more than 19 points and eight rebounds per game.

Kersey played alongside other Portland greats, including Clyde Drexler and Terry Porter. He made two trips to the NBA finals: in 1990 and 1992.

His career totals with Portland are remarkable and have stood the test of time. He ranks in the top five in multiple categories for the team including games played, points, rebounds and steals.

Later in his career, Kersey also captured his elusive NBA championship ring with the San Antonio Spurs in 1999.

Many NBA players, coaches and fans wrote heartfelt remembrance of Kersey on Twitter as news of his death trended into the night Wednesday.

Former teammate Clyde Drexler told CSNNW, "It is so sad. It is a huge loss for the Portland community. He was the greatest guy, the nicest friend, teammate and brother. He was loved by everyone."

"It's a team sport. You don't do anything individually. You do it as a team. You win. You lose. You cry. You laugh. But, most of all, you enjoy your life and remember the memories," Kersey said.