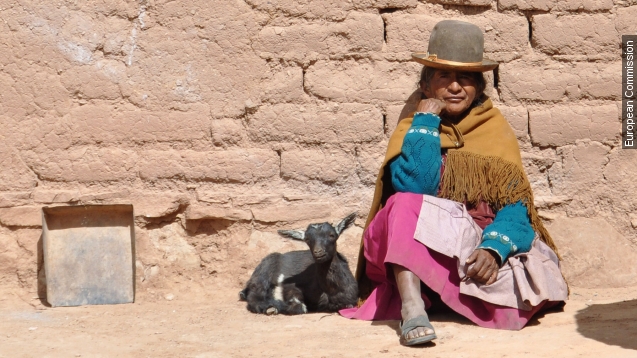 The pope's visit to South America is ostensibly focused on poverty. (Video via Vatican)

It's the first trip to the region he's gotten to schedule, and it jives with his record as pope that he's visiting three of the continent's poorest countries. (Video via La Television)

But it also jives with his other major focus: climate change.

The pope's argument in his widely publicized encyclical last month was that those two things are invariably intertwined: Climate change will have a disproportionate effect on the world's poor. (Video via GoPro, Why Poverty?)

And there are few places that illustrate that better than Latin America, especially in the Andes. (Video via Heifer International)

Take, for example, Bolivia. More than half of the population lives below the poverty line, and in rural areas that rate rises to more than 75 percent. (Video via YouTube / nils169, UNICEF)

The majority of those people are subsistence farmers who rely on their harvests to survive, which leaves them especially susceptible to the effects of climate change. (Video via Al Jazeera, University of Arizona)

"They're also vulnerable to freezes, particularly if they occur after crops have been planted; protracted droughts and delays to the start of the rainy season, which typically starts in November," University of Arizona climatologist Zack Guido explained.

And the country, as a whole, relies on its glaciers for water, so with the glaciers melting, Bolivia's water supply is in jeopardy. (Video via The New York Times)

That in a country that a little more than a decade ago saw armed conflict over water, driven by economic instability and the privatization of water supplies. (Video via The Democracy Center)

To the pope, Bolivia is one of several countries in the global periphery set to suffer the worst of the consequences of climate change; a problem it has done little to cause.

This video includes images from Getty Images and music from YACHA-SACHA / CC BY 3.0.