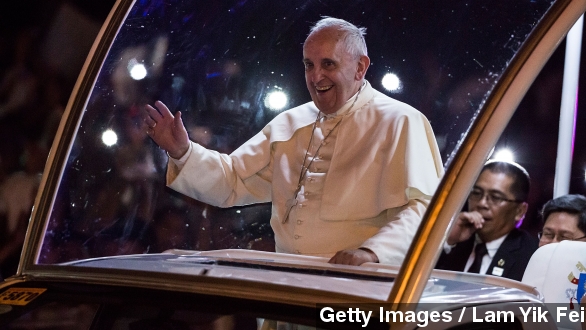 SMS
Pope In Philippines: Pontiff Talks Charlie Hebdo, Climate
By Cliff Judy
By Cliff Judy
January 15, 2015
Pope Francis spoke to reporters before landing in the Philippines. Many in the country are eager to hear his message on the exploited and poor.
SHOW TRANSCRIPT

The pope, especially this one, is going to be a rock star pretty much anywhere he goes.

But Pope Francis' visit to the Philippines will likely take that adoration to an entirely new level. Francis landed in Manila Thursday, greeted by a country not just fervently Catholic, but eager to hear his planned message advocating for the exploited and poor. (Video via The Vatican Television Center)

Before he even landed, Pope Francis spoke to reporters aboard the plane about a number of topics from climate change to the Charlie Hebdo attacks in Paris.

Pope Francis has made a habit of delivering down-to-earth, inclusive messages since his rise to pontiff. Which is why some of his statements on the Paris attacks surprised the media.

The pontiff, of course, denounced the attacks, but reporters on the plane also said he effectively only half-defended freedom of expression by encouraging people not to speak against other people's faith. (Video via Al Jazeera)

The men who attacked Charlie Hebdo said they did so because the satirical magazine printed cartoons of the Prophet Muhammad. (Video via Sky News)

The pope also said he believed it was clear humans are primarily responsible for climate change and hoped a global conference later this year leads to meaningful changes to protect the environment.

The highlight of the pope's visit to the Philippines isn't expected for several more days when he does an open-air Mass in Manila. Much of the coverage to this point has focused on protecting a man who loves to be up close and personal with crowds. (Video via BBC)

There's a definite reason outlets are focusing on that particular angle. The Philippines have seen two assassination attempts on popes during visits, the most recent in 1995 when police thwarted a bombing plot against Pope John Paul II. (Video via NBC)

Pope Francis is also expected to visit Tacloban over the weekend, one of the areas worst-hit by 2013's Typhoon Haiyan that killed thousands of people.