Pope Francis Warns Against Building Walls And Fear In Politics 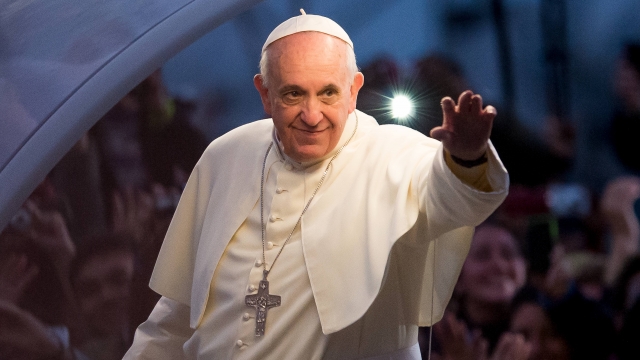 SMS
Pope Francis Warns Against Building Walls And Fear In Politics
By Ethan Weston
By Ethan Weston
November 6, 2016
Speaking at the World Meeting of Popular Movements, the pope urged politicians to do more for refugees.
SHOW TRANSCRIPT

On Saturday, Pope Francis urged world leaders to do more for the refugee crisis and condemned the use of walls to keep refugees out.

The pope was speaking at the World Meeting of Popular Movements — a meeting at the Vatican that brings together the poor, unemployed and other people at the margins of society.

While Francis didn't mention the upcoming U.S. election, or any particular politician or country by name, many are linking his statements to Donald Trump's threats to build a wall along the U.S.-Mexican border.

Francis has given his thoughts on Trump in the past.

"A person who thinks only about building walls, wherever they may be, and not building bridges, is not a Christian. This is not the gospel," Pope Francis said in February.

And the pope certainly didn't shy away from the "building walls" metaphors during his speech. He spoke for several minutes warning against "physical and social walls ... that enclose some and exile others."

Immigration has been a contentious topic during the 2016 election, especially when it comes to refugees. Hillary Clinton has suggested an increase in the number of refugees the country accepts. Trump has said he wants to "stop the tremendous flow of Syrian refugees" into the U.S.

The pope's speech also comes as countries across Europe battle the world's refugee crisis. Many are using border walls and fences to stem the flow of migrants trying to enter their countries.

In September, the U.K. began constructing its own wall in the French port city of Calais to keep migrants from entering Britain.

Pope Francis addressed the world's response to that crisis in Saturday's speech. He urged nations to respond with more kindness to refugees and pointed to the many refugees who died in the Mediterranean saying: "No one should be forced to flee his or her homeland."