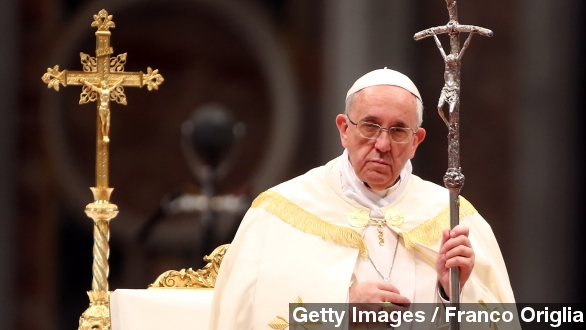 SMS
Pope Francis Suggests World's Conflicts Amount To WWIII
By Jake Godin
By Jake Godin
September 13, 2014
While celebrating a Mass to commemorate the 100-year anniversary of WWI, Pope Francis alluded to a third world war and warned of the world's apathy.
SHOW TRANSCRIPT

Pope Francis marked the 100-year anniversary of WWI Saturday with a bold statement — that the crime, terrorism and destruction worldwide today essentially amounts to a third world war.

The Pope made his statement during a special Mass held at the Redipuglia Italian WWI memorial, where the bodies of 100,000 Italian soldiers are buried.

Citing a passage from the Old Testament, Pope Francis warned the world’s apathy was contributing to a third world war, fought in a “piecemeal" manner.

All this echoes some previous — equally dire — warnings from Pope Francis.

During his first “State of the World” address in January, Pope Francis referred to the “general indifference” of the world in the face of the African European refugee crisis.

It’s not unusual for the Pope to call for an end to conflicts — he is, after all, the Pope. Francis has made numerous calls to end conflicts since his election, including those in Syria, Ukraine and the Palestinian-Israeli war.

But in an unusual move, the Pope did show support in an August interview for military action against ISIS as a means of removing the radical group from Iraq. That’s something a moral theology professor told USA Today was “the most pronounced endorsement of the use of force of any pope … in the last 100 years.”

Referring to the Iraq war in his own "State of the World" address, John Paul II warned “war cannot be decided upon ... except as the very last option and in accordance with very strict conditions.”

A Vox writer dug up those “strict conditions” outlining what conditions a Papal-approved war must meet:

First, the damage being done must be both far reaching and certain. Any other method for ending the conflict must have been used or deemed impractical as well. There needs to be a good chance for success and any use of weapons must not contribute to the conflict.

A professor of moral theology told Vox the persecutions of the Yazidis, Christians and other Muslims in Iraq are “precisely the kinds of victims of aggression international law seeks to protect.”

Pope Francis's visit to the Italian WWI monument Saturday was just as much a symbolic move for peace as it was a personal move. According to the BBC, his grandfather fought in The Great War for Italy before emigrating to Argentina.