Pope Francis Scolds Mexican Crowd That Nearly Pulled Him Down 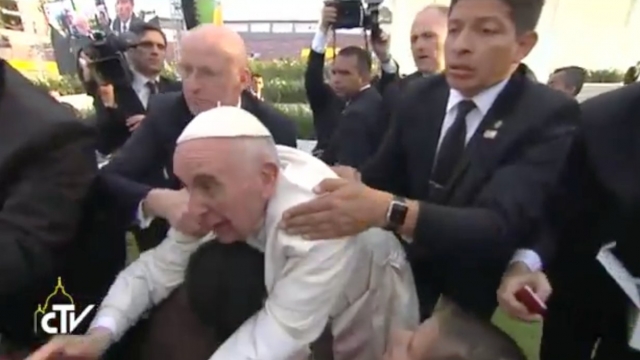 SMS
Pope Francis Scolds Mexican Crowd That Nearly Pulled Him Down
By Matt Moreno
By Matt Moreno
February 17, 2016
The overly excited crowd in Morelia, Michoacán, nearly pulled Pope Francis to the ground while he was greeting attendees.
SHOW TRANSCRIPT

An overzealous Mexican crowd nearly pulled Pope Francis down Tuesday. In response, the pope scolded them.

Michoacán, located roughly 200 miles west of Mexico City, has been hit hard by drug wars. More than 100,000 people from the state have died or have gone missing in the past decade, mainly due to drug gangs.

Pope Francis spoke to the young crowd, saying, "It is a lie to believe that the only way to live, or to be young, is to entrust oneself to drug dealers or others who do nothing but sow destruction and death."

Pope Francis will wrap up his five-day trip to Mexico with a Holy Mass in Ciudad Juárez late Wednesday.

This video includes a clip from CCTV and images from Aleteia Image Department and music from MADS / CC BY 3.0.